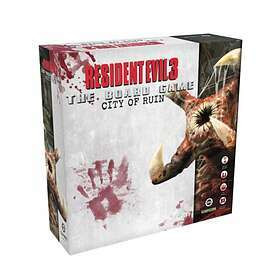 Resident Evil 3 The Board Game: City of Ruin (Expansion)

This expansion includes nine new scenarios to expand your Resident Evil 3: The Board Game campaign. That’s over 11 hours of extra gameplay.

City of Ruin adds nine new scenarios to the fourteen scenarios from the core game, significantly increasing the play time from 19 hours to over 30 hours. These scenarios introduce new rules and experiences that will challenge even the hardiest Resident Evil™ board game veterans.

In fact, City of Ruin includes two massive new bosses—with bases so large they take up multiple squares. These powerful enemies have considerably higher stamina, can perform much more devastating attacks, and can viciously shove characters out of their path when they move.

In short, they’re not to be trifled with. Weapons won’t be enough to defeat them. Instead, players will need to be clever in how they use their environment to defeat these terrible foes. But, of course, the bosses aren’t alone. City of Ruin adds three new enemy types and twelve new enemy miniatures to Resident Evil™ 3: The Board Game. Each one of these enemies is dangerous in their own right, forcing players to learn new strategies to escape or defeat them.Still, don’t worry too much. You won’t be without help.

To assist you in facing these terrible foes, City of Ruin includes new weapons, and new ammunition types for the Handgun, Shotgun, and Grenade Launcher.